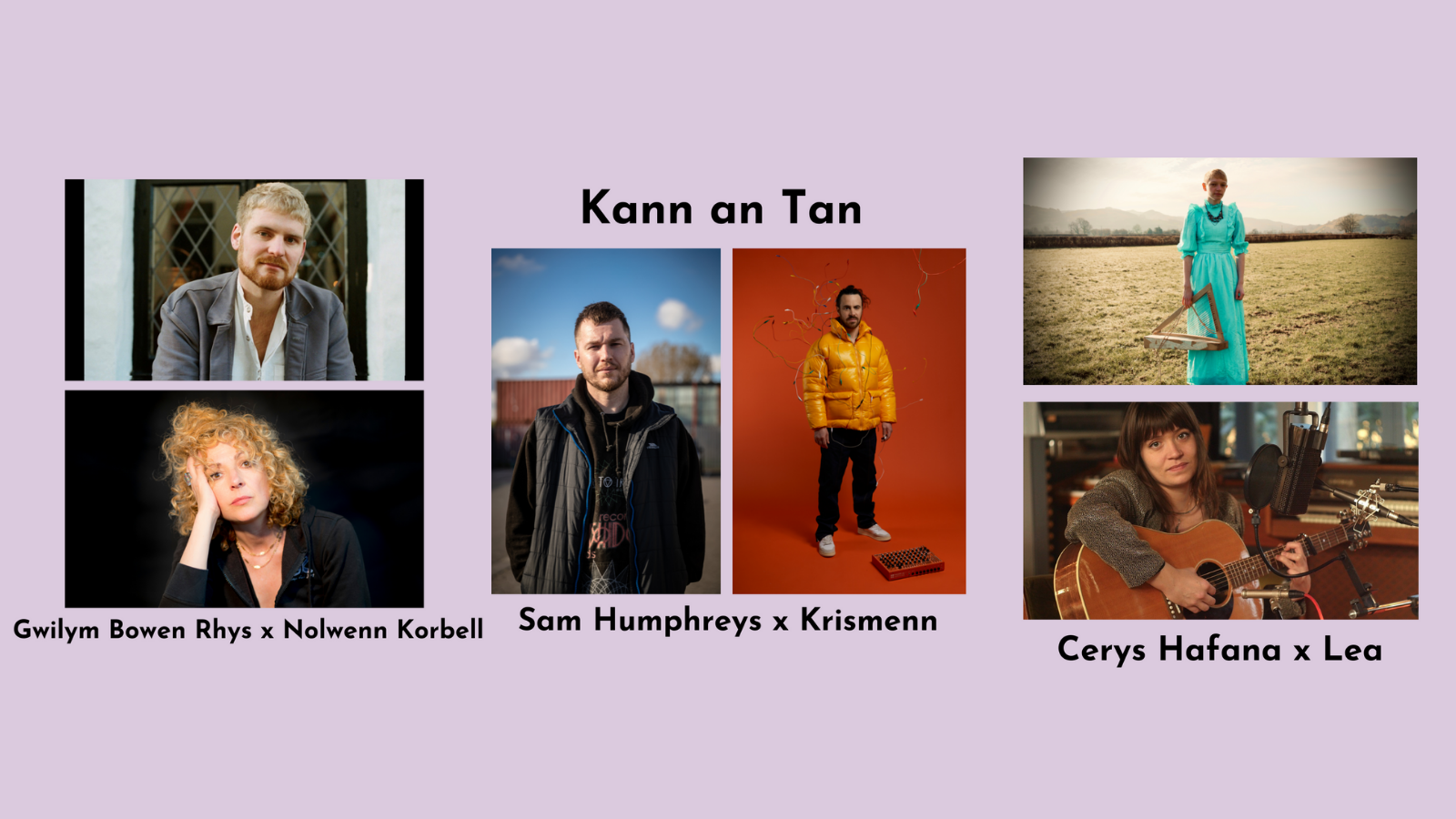 Tafwyl, Trac Cymru and the British Council are pleased to announce a special project combining musicians from Wales and Brittany to produce a special set for the Tafwyl 2022 stage. The project brings together six artists – three from Wales and three from Brittany to create new music together as partners. The artists working together are Gwilym Bowen Rhys and Nolwenn Korbell, Cerys Hafana and Léa, and Sam Humphreys and Krismenn. The project is being facilitated by musician Lleuwen Steffan – who hails from Wales and lives in Brittany.

The project, funded by British Council Wales, aims to give the artists the opportunity to work with an artist from a different country who’s also creating and performing in a minority language. The artists have already made their debut by collaborating on the web and will spend three days before Tafwyl together in Musicbox studios in Cardiff – before performing live together at Y Sgubor stage in Tafwyl (18 + 19 June 2022).

“I’ve been lucky enough to have had long and very rewarding relationship with the festivals of both Wales and Brittany, and now as Director of Trac Cymru, our national organisation for our traditional arts I’m so glad we’re able to work together to kick start a new generation of collaborations and cultural conversations.

Together we’ve found 6 artists who we think will revive that link and we’re so excited to be able to bring them to Tafwyl this year – especially after the digital desert that was COVID. However bad it was, it taught us how to collaborate across oceans and gave us a new way of approaching each other and creating music. Trac Cymru have been working quietly with Menter Caerdydd and the British Council to bring the indigenous music of Wales to new and familiar audiences and we’re absolutely delighted to be part of the team that has co-created this project.”

Gwilym hails from the village of Bethel in North West Wales. He’s been singing in his native Welsh language since he can remember and has developed a deep connection with the traditional songs and music of his land. His music is a mix of old and new, bringing to life ancient Welsh lyrics and melodies with his own progressive musical approach. In 2019 he won the award for ‘best solo artist’ at the Welsh Folk Awards and has performed his music around the world. Gwilym is collaborating with Nolwenn Korbell, a French Breton singer-songwriter and actress. Best known for her songs in Breton, with her musicians or in a duet with guitarist Soïg Sibéril, she released five albums, regularly performs in concerts, and also keeps acting in theatre productions and films.

Cerys Hafana is a talented multi-instrumentalist from Machynlleth, who specialises in the triple harp and the piano, and she also plays Celtic harp, clarinet and fiddle. On the triple harp she has performed nationally and further afield, including on the Aran Islands and at the Interceltic Festival in Lorient. Cerys is collaborating with Léa, who is studying  singing at the Conservatoire de Lille. She studied in Breton through the Diwan school system in Brittany. She’s a singer and composer who’s inspired by folklore, and influenced by Bob Dylan, Joan Baez and Lhasa.

Sam Humphreys comes from the Llŷn Peninsula. He started originally playing rock and electronic music in night clubs before discovering a magic mix of folk and modern styles. Alongside being a musician, he has been recording, producing and mixing with a wide range of artists and styles. He’s also worked as a composer for film and television.

Sam is collaborating with Krismenn, a French rapper, singer-songwriter and musician of Breton culture. He is the inventor of ‘kan ha beatbox’, combining the traditional folk style of kan ha diskan with human beatbox. Passionate about rap, beatbox and the Breton language, Krismenn’s approach mixes traditional singing with bluegrass, urban and electronic music.

In December 2021 he became artistic director of the Kreiz Breizh Akademi.

The project is funded by British Council Wales.