Cass Meurig on the crwth and finding repertoire

The crwth is a medieval instrument, which disappeared from Wales around the end of the eighteenth century. It has only fairly recently been reclaimed as a contemporary musical instrument, with perhaps around twenty players by now. Resurrecting a dead instrument is an interesting challenge, not only in terms of learning how to play but also in terms of what to play. No book of crwth tunes as such has survived, if indeed there ever was one. Every player has had to work out his own solution to the problem, some concentrating on the medieval repertoire, others on folk tunes, and others on using the crwth as accompaniment. There is nobody to set the rules – which is part of the appeal.

First one must learn how to play the crwth, and understand what sort of tunes are likely to work on it. It is often said (mainly by fiddlers) that the crwth is a limited, primitive instrument. They mean that it doesn’t do what a fiddle does, preferably at the first attempt. The crwth is a sophisticated and highly expressive instrument; but it requires a degree of humility and several years of practice before revealing its secrets. Crwths, in fact, play crwth music, in much the same way as pipes play pipe tunes and voices sing songs.

As far as melody is concerned, the crwth has around an octave and a half within reasonably easy reach, with rich drones and chords above and below. With six strings and a completely flat bridge (which means one can bow all six at the same time), it is full of harmonic potential, and also has rhythmic special effects by plucking strings with the left thumb. The upper notes are reached by moving the left hand up the fingerboard, which means it makes sense to choose tunes of a fairly narrow compass which (more importantly) don’t jump around too much. Forget the jigs and reels, and think in terms of harmony and drones.

Where can we find crwth tunes? Starting in the middle ages (with thanks to Bethan Miles for her thorough research) we have lists of the names of crwth pieces, some of which have survived in tablature in the manuscript of the harper Robert ap Huw, copied in 1613. This is ancient music, strange to our ears; but some pieces work hauntingly well on the crwth. From the sixteenth and seventeenth centuries we have a document and a poem listing tunes which were played by crwth players. These were the popular tunes of the day, on the whole, some of which have survived in later manuscripts such as Pepper’s Black (aka Sbonc Bogel) and Nutmegs and Ginger (aka Breuddwyd y Frenhines); others have long since disappeared. There are also two tunes with crwth players in the title: ‘Cainc Gruffudd Rowland y crythor’ (‘Griffith Rowland the crwth player’s tune’) and ‘Dugan y crythor du’ (‘The black-haired crwth player’), both of which are notated in the manuscript of Anglesey fiddler Morris Edward.

Then begins the search for tunes which might work on the crwth. There is certainly no shortage of material –  hundreds of tunes have survived in books and manuscripts from the eighteenth century onwards, as well as the modern oral tradition, of course. Songs often work better than dance tunes, particularly hymns and plygain carols since they were written with full harmonies in mind. But one can also adapt and vary dance tunes by moving notes, changing rhythms or  rewriting certain phrases in order to fit within the range of the crwth and make the most of its harmonies. In this respect much can be learned from players of instruments with a similar approach, including the bagpipes, hurdygurdy and instruments related to the crwth such as the hiiu kannel in Estonia.

Another possibility is to compose new music. In a way, this is an easy step to take; one could say that an element of composition has to happen every time one sets a tune to the crwth, in the adaptation, variation and choice of harmonies and rhythmic effects. The strength of the present small revival in crwth playing is this creative element; without the weight and expectations of tradition, there is true freedom to create. 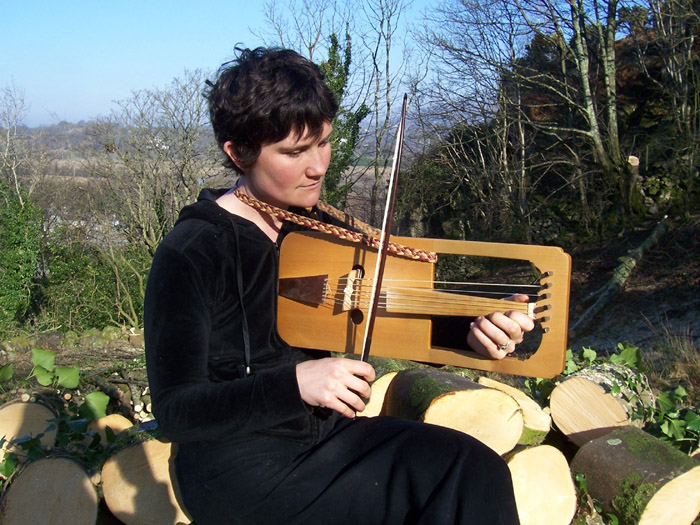