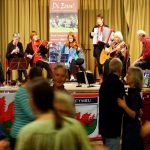 Dancing is usually of a British origin, (Welsh, English, or Scottish) with a variation of any of these on occasions, for example: Cornish or Manx. Further interest is gained, at times, with non-British styles, e.g Breton or an East European circle dance.

We meet regularly on the third Friday of the month (except August) with only an occasional variation. Dancing starts around 7.30pm, with the Dolau Bran sessions finishing at about 10.30pm and the larger events continuing until later.

Generally, most of us have been dancing for some years but are always ready to welcome beginners wanting to ‘have a go‘ and more experienced dancers bringing in new enthusiasm and interest. Feel free to come on your own, with a partner or with your family and feel assured of a warm welcome.